Home » View All » What is a VRM and Why Does My CPU/GPU Need One?
× Share this Article

What is a VRM and Why Does My CPU/GPU Need One? 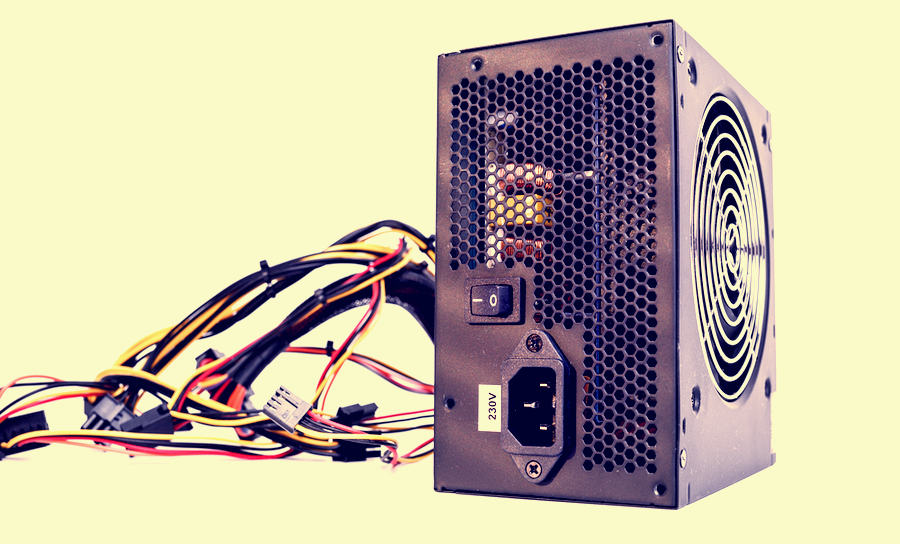 You’ll need to convert the 12 V output from this power supply to a lower level for use in your CPU.

Power conversion, whether it’s AC-AC, AC-DC, or DC-DC, is fundamental to modern life. Without power conversion, we’d probably be stuck with Van der Graaf generators for powering our electronics. When it comes to the world of computers, specifically CPUs, ultra-stable DC-DC power conversion is required. The computer industry has weighed the costs and benefits of different DC-DC converters and ultimately settled on voltage regulator modules (VRMs) to provide stable DC power to CPUs.

So what is a VRM? There are many ways to convert between DC voltage levels, and a VRM does exactly that. A VRM is essentially a tricked-out buck converter and operates under the same working principle. However, VRMs for high performance computers, especially overclocked gaming computers, tend to use components that are typically not found in a standard voltage regulator circuit or IC.

What is a VRM and How Does it Work?

A VRM converts the 12 V output from a computer power supply to a lower voltage (ranging anywhere from 1.1 V to 3.3 V) for use by a CPU or GPU. This switching regulator is implemented as a buck converter and has a rather simple layout, although a VRM uses different components than a typical switching regulator. Just like a buck-boost converter or a forward converter, a VRM uses PWM to provide switching in MOSFETs, which provides the desired regulation. The output voltage and current can then be set by choosing the appropriate duty cycle and frequency.

VRMs come in two flavors: single-stage and multistage (sometimes called a multiphase VRM). The circuit diagram for a typical single-stage VRM is shown below.  The low-side MOSFET and the inductor provide feedback for regulation, and the voltage seen by the processor is stabilized by the capacitor. A multistage VRM spreads the MOSFETs and inductors out over multiple stages in parallel with low duty cycle (~10% is typical, although this depends on the number of stages).

Why Use a Multistage VRM?

Modern computers use a multistage VRM, typically with 3 or more phases. Because the MOSFETs are cascaded in parallel, they naturally switch with some delay that is equal to the on time of the PWM signal. This causes the stages to switch in sequence. The benefit of using multiple stages is that heat generated in the MOSFETs is spread out over a larger area, although this increases the cost per board. However, this is an important aspect of modern high performance computing as thermal regulation can be a major problem in GPUs, especially with overclocked processors.

The output voltage from the VRM will be damped and will fall off slowly, just as is the case in any RLC circuit. This should illustrate the other benefit of using a multistage VRM: the output voltage is essentially a damped transient response, and the transient voltage will have less time to drop off when switching occurs more often. Note that the minimum duty cycle is just the switching frequency multiplied by the minimum on-time for the PWM signal.

Using multiple stages allows the PWM frequency in each MOSFET to be lower, yet the output voltage will be compensated due to switching in each stage. This causes any droop in the output voltage to be less than that seen in a single stage VRM or a typical switching regulator that uses a longer duty cycle with a given time constant. This is shown in the figure below. 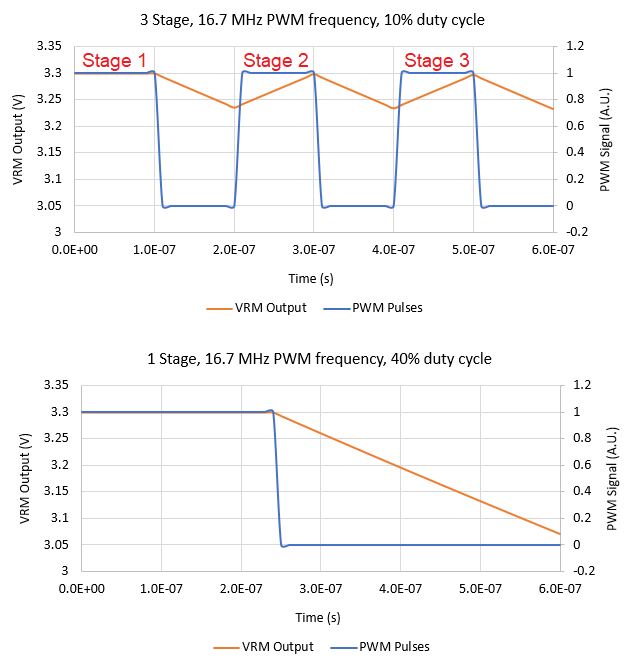 Components in a VRM

VRMs can be used for other applications than regulation for a CPU or GPU. When used for a CPU or GPU, the inductor shown in the above diagram is not an inductor, it actually a super ferrite choke. These chokes are important for eliminating switching noise from the MOSFETs in each stage. A super ferrite choke has lower parasitic capacitance than an inductor and essentially functions as a parallel RLC circuit. The low parasitic capacitance provides a higher damping in the transient response seen at the output. Because the current draw from the MOSFETs and the heat they generate, the MOSFETs should include a finned heatsink if space allows.

The capacitors shown in the VRM circuit diagram should be chosen such that it has a self-resonance frequency that is larger than the PWM switching frequency (i.e., it behaves like an ideal capacitor) in order to provide a low impedance path to ground for any high frequency noise. Note that the combination of the load, output capacitor, and ferrite chokes form a complex RLC circuit. The capacitor and ferrite chokes should be chosen such that the transient response in the equivalent RLC circuit is overdamped, which ensures a more stable output from the VRM. 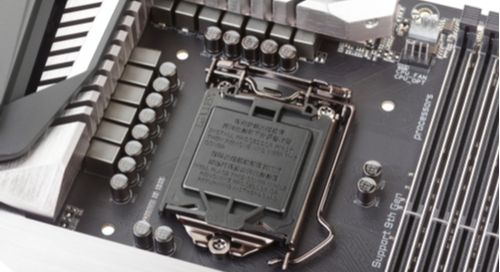 CPU with a multistage VRM

No matter what type of power conditioning and regulation system you are building, you can design and validate a VRM and many more circuits with OrCAD PSpice Designer from Cadence. This unique package is specifically adapted to complex PCB designs, and you can build models to simulate and analyze the behavior of your most complex circuits. 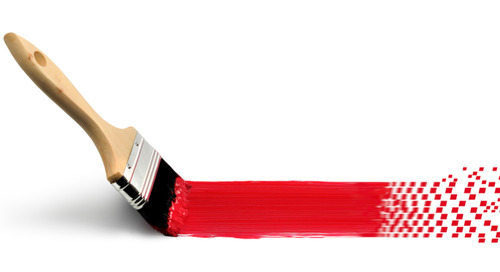 For the best performance of your analog circuits, here are some layout tips that will help your types of an... 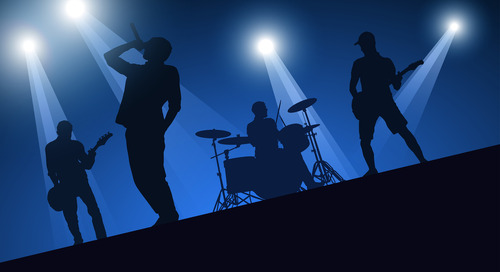 To help printed circuit board designers create hardware that will last its entire intended life, a life cyc...