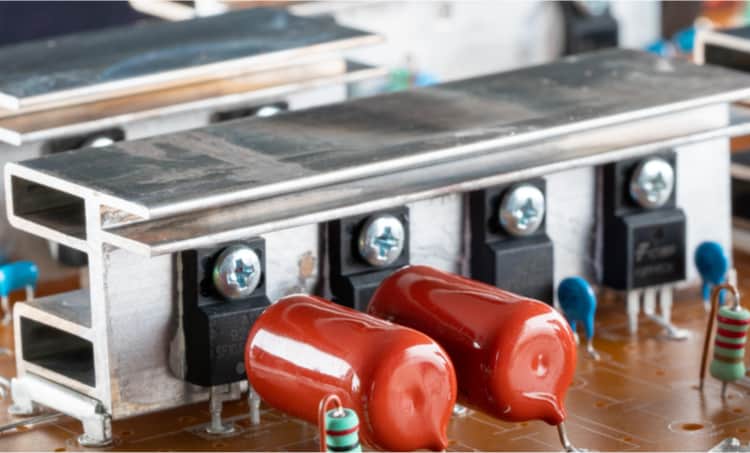 MOSFETs in parallel are common in the aerospace and automotive industry

As a power electronics engineer in the aerospace industry, I have worked on several power converters. Most of these power converters were inverters for transforming battery power into AC power of a desired magnitude and frequency. SiC MOSFETs in parallel were used for realizing a single switch in the inverter. The paralleling of MOSFETs helped the inverter handle more current and increased the thermal reliability of the system. MOSFETs in parallel are common in the aerospace and automotive industry. In this article, we will discuss the basics of MOSFETs in parallel.

MOSFETs are widely used power electronic switching devices in today's high-power converters. They are available as single switches or as modules. In MOSFET modules, there are different configurations, such as a half-bridge, H-bridge, or six-pack, which are specifically designed for high-frequency applications.

The primary electrical specifications that define a MOSFET are its drain current (ID) and the maximum voltage between drain and source (VDS). When choosing a MOSFET, designers must make sure the voltage and current associated with the switch in the given application are less than its rated values.

For a given operating temperature, the selection of a MOSFET is based on whether the application current is less than the rated current calculated at that temperature. If less, the MOSFET can be selected. If the application current exceeds the rated current, it can overheat the junction and damage the switch. In most cases, what happens is we fail to find a suitable MOSFET module or device that matches the electrical and thermal requirements of the application. In such cases, the option is to parallel the MOSFETs to improve their current handling capability and power dissipation along with the temperature rise.

Generally, single MOSFETs fail to meet the extremely high levels of current demanded by power converters. To meet the electric current requirements of high power applications, multiple MOSFETs can be connected in parallel. The MOSFETs connected in parallel handle more current and can be driven using one gate output. For example, by replacing a single MOSFET with two MOSFETS in parallel and driven simultaneously by one gate signal, the current capacity can be approximately doubled. If the paralleled MOSFETs are exactly identical, then they share the current equally upon turning on.

If the MOSFETs in parallel are exactly identical to each other, then the combination can be treated as a single component. The effective on-state resistance RDS(on) of such parallel MOSFETs is reduced considerably and so is the power loss associated with the combination. As the power dissipation decreases, the junction temperature of the MOSFET remains under the limit. The parallelling improves the thermal stability of the connected MOSFET, even when the total current through the parallel branches is greater than the individual device current rating.

However, finding two exactly identical MOSFETs is impossible. The parameter mismatch between the MOSFETs in parallel results in critical issues. Current imbalance and parasitic oscillation are the two critical issues faced by most parallel combinations of MOSFETs.

MOSFETs in parallel are connected with a notion that each device handles the uniform flow of current through it and there is no current concentration during dynamic or steady-state conduction of the devices. However, there are conditions that shatter the current sharing between MOSFETs in parallel.

When there are parameter mismatches, say differences in RDS(on), the MOSFET with the lowest on-state resistance carries the highest current. However, this current imbalance is compensated due to the positive temperature coefficient of RDS(on). As the device carries more current, it heats faster than other parallel MOSFETs and this increases its on-state resistance value. The hike in on-state resistance decreases the current through it and eventually balances the current flow and power dissipation in all the paralleled MOSFETs.

However, this is not the case when the MOSFETS are conducting in the reverse direction through the body diode. The forward voltage of the body diode decreases with a temperature rise and enables more flow of current through it. With time, the current imbalance increases and causes thermal runaway, damaging the MOSFETs in parallel.

Unsymmetrical circuit wiring can worsen heating due to the current imbalance seen in MOSFETs in parallel. A symmetrical layout of MOSFETs and analog simulation can help in alleviating the issues in switching converters with a single MOSFET or MOSFETS in parallel.

The circuit design and PCB layout tools available from Cadence offer designers a complete set of features to help them design circuits, simulate signal behavior, and create PCB layouts. Leading electronics providers rely on Cadence products to optimize power, space, and energy needs for a wide variety of market applications. If you’re looking to learn more about our innovative solutions, talk to our team of experts or subscribe to our YouTube channel.