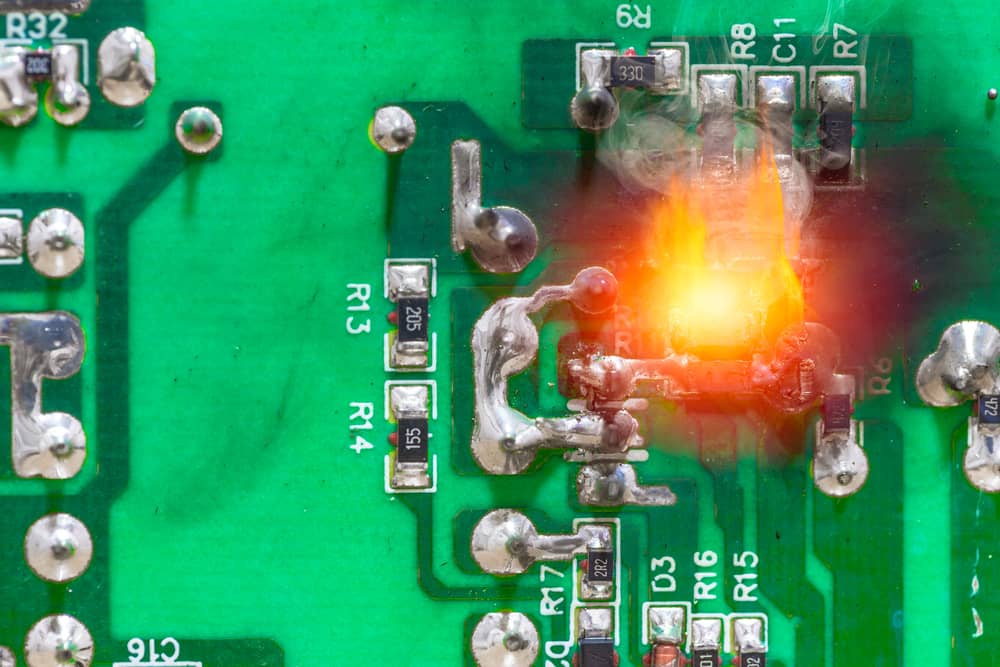 The wiring or trace design on a printed circuit board impacts the electrical and thermal performance of the board. The wiring or traces carry either supply currents or signals. Depending on the ampere, the heating effect varies. Usually, the power distribution network is adversely affected by Joule heating due to the higher ampere values.

In this article, we will explore Joule heating in PCBs and how simulation studies help designers achieve the excellent electrical and thermal performance of a board.

Joule Heating and Its Effects on PCB Wiring

What Is Joule Heating?

When electric current flows through a conductor, it produces thermal energy. The physical phenomenon that is responsible for the generation of heat energy is called Joule heating. As the Joule heating phenomenon generates thermal energy, it increases the temperature of the system. If the system under consideration is a printed circuit board, the rise in temperature can burn off the components or even result in complete damage to the board.

A printed circuit board consists of alternate layers of dielectric material, current-carrying metal traces, and vias. Electric components are mounted on the top or bottom surfaces of the circuit board. The components are connected to each other or to layers using traces and vias, respectively.

The traces or wires laid out on a circuit board are critical for carrying supply current or data signals. The supply current is predominantly DC in electronic PCBs. Signal currents are responsible for the communication between different components. The data signal traces are designed to be thin, as they carry only a few milliampere currents. Wide-conducting planes are set aside for carrying high power supply currents. The design of the power distribution wiring impacts the electrical and thermal performance of the PCB.

For example, take PCB trace heating. When current flows through the PCB trace, it generates heat loss, which significantly decreases board performance, efficiency, reliability, and longevity. Joule heating is detrimental to both the electrical and thermal performance of electrical systems, especially in printed circuit boards.

The electrical resistance of power transmitting wires or traces is a key parameter aggravating the Joule heating effect in PCBs. The DC losses due to the Joule heating in power wires produce a voltage less than the nominal value at the load. The geometry of the power wiring–such as plane-to-trace necking and sharp corners–is not so favorable for the electrical performance of PCBs. The Joule heating is concentrated in certain specific regions called “hotspots” and increases the aging of the PCB. The heat dissipation from components mounted on a board adds to the DC resistive or ohmic losses, worsening the thermal performance.

The demand for design complexity and wattage is exponentially increasing along with the rise in demand for PCBs. All of these reflect in the form of heat flux from Joule heating. Temperature differences, overheating hotspots, premature aging, and component failure are some of the effects of Joule heating. It is essential to accurately estimate the Joule heating losses and carefully design the size, geometry, and component placement to compensate for or alleviate losses.

Joule heating simulation helps designers identify the challenges caused by uniform or non-uniform Joule heating in PCBs. Simulation can also help in modeling heat removal techniques for a given board.

Reduce Power Loss Due to Joule Heating With Cadence Tools

With the help of Cadence’s suite of design and analysis tools, you can design applications with reduced power losses due to Joule heating. Leading electronics providers rely on Cadence products to optimize power, space, and energy needs for a wide variety of market applications. If you’re looking to learn more about our innovative solutions, talk to our team of experts or subscribe to our YouTube channel.