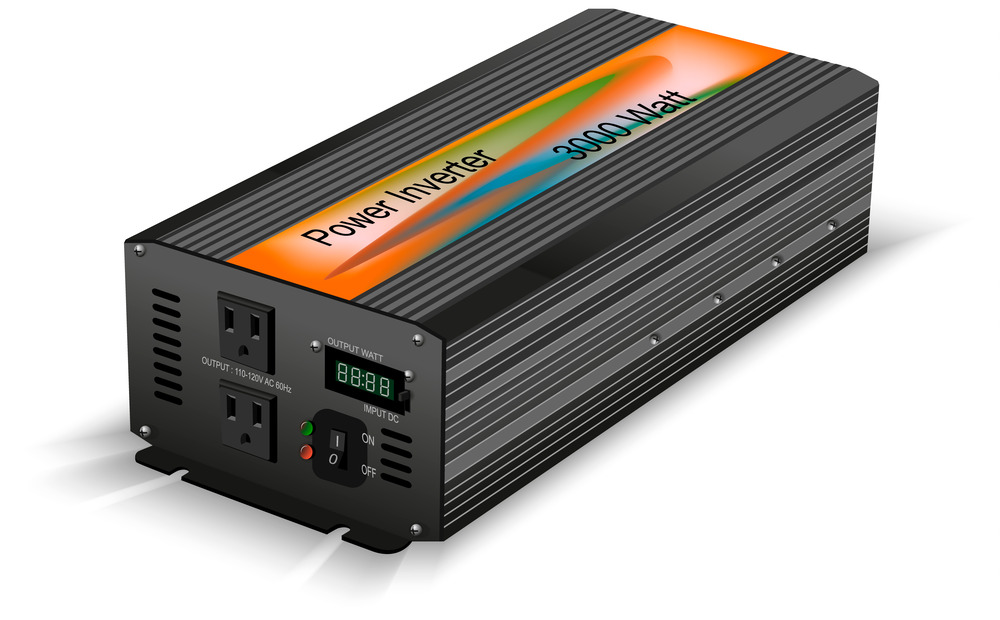 Inverters are devices that transform direct current (DC) to alternating current (AC). They take power from the DC source and convert it to electrical power; they do not create any additional power and are therefore not generators. The input and output voltage and frequency are specific to each individual inverter and their designed task. Inverters used in applications with high currents and voltage are known as power inverters. Inverters used in applications with low currents and voltages are known as oscillators. Circuits that do the opposite–convert AC to DC–are called rectifiers. In this article, we’ll be doing an in-depth dive into inverters and their functions, design, and applications. 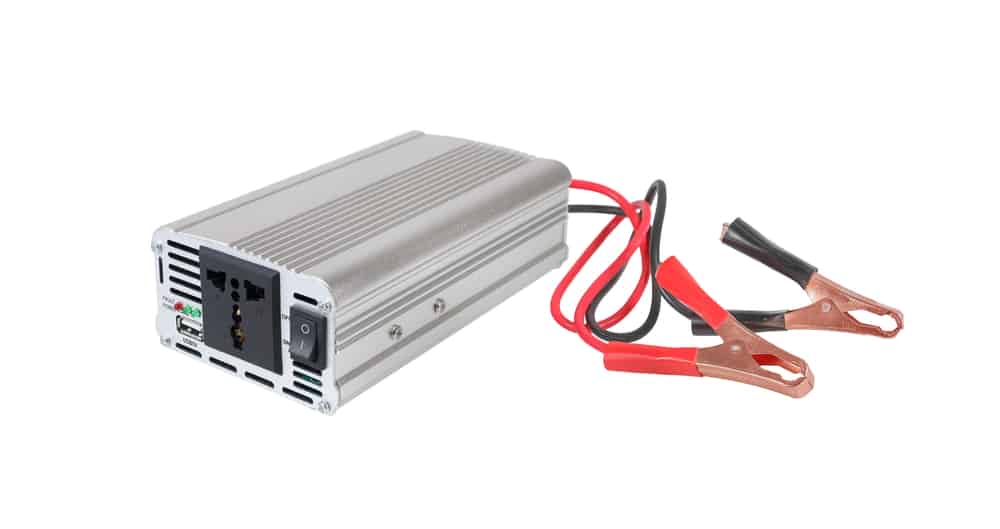 Inverters have a DC input, a specific frequency, and AC voltage level–depending on their designed load.

Inverters use a stable DC power source as an input. Common input values range from low voltage to hundreds, depending on the inverter design. For example, 12 V DC input is common for consumer and commercial inverters that are powered from rechargeable lead acid batteries or other automotive electrical outlets. Home energy systems may use 24, 36, or 48 V DC, whereas inverters in photovoltaic solar panels may have 200 to 400 V inputs. Some inverters reach hundreds of thousands of volts in high-voltage direct current transmission systems.

Inverters output an AC signal that is typically either a sine wave, square wave, or modified quasi-sine wave, depending on the application. Inverter signal outputs that aim to replicate mains power are commonly 50 or 60 Hz at 120 or 240 VAC to match standard power line frequencies and voltage. In cases where the output needs to be further processed or stepped up, the output frequency may be much higher for transformer efficiencies.

Inverters are used to power loads that require AC power. The two types of AC loads are single-phase and three-phase loads, so there are inverters designed for each type of load.

Inverters are designed depending on the desired load and AC waveform of interest. 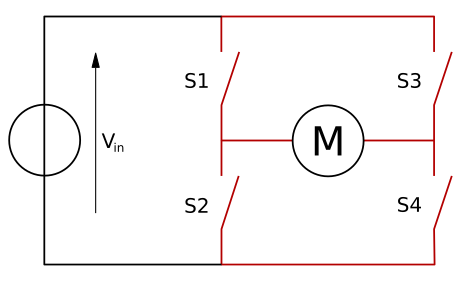 Structure of an H-bridge (highlighted in red). From Wikipedia.

For a single phase load, a half bridge inverter or full H-bridge design can be used in the inverter. With a half bridge configuration, two transistors are used on each side of the load. This works with an electronic toggle switch, such as a MOSFET, and is not able to switch the voltage polarity applied to the load.

For a full bridge configuration, as shown in the image above,  switches are on in pairs. S1 and S4 result in +VIN across the load, whereas S3 and S2 -VIN are powered across the load. 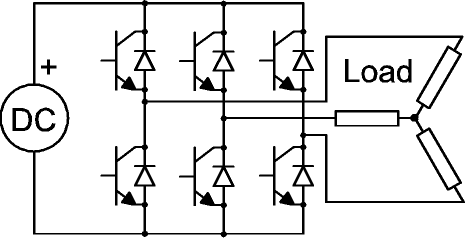 Three phase inverters are generally used for variable-frequency drive applications such as motor driving. They consist of three-single phase inverter switches and each one is connected to one of the three load terminals, as shown in the image above.

With a 3-phase inverter, there is a 6-step (23-2 states) switching sequence, resulting in 3 possible voltage levels across 2 arbitrary ports of the load. 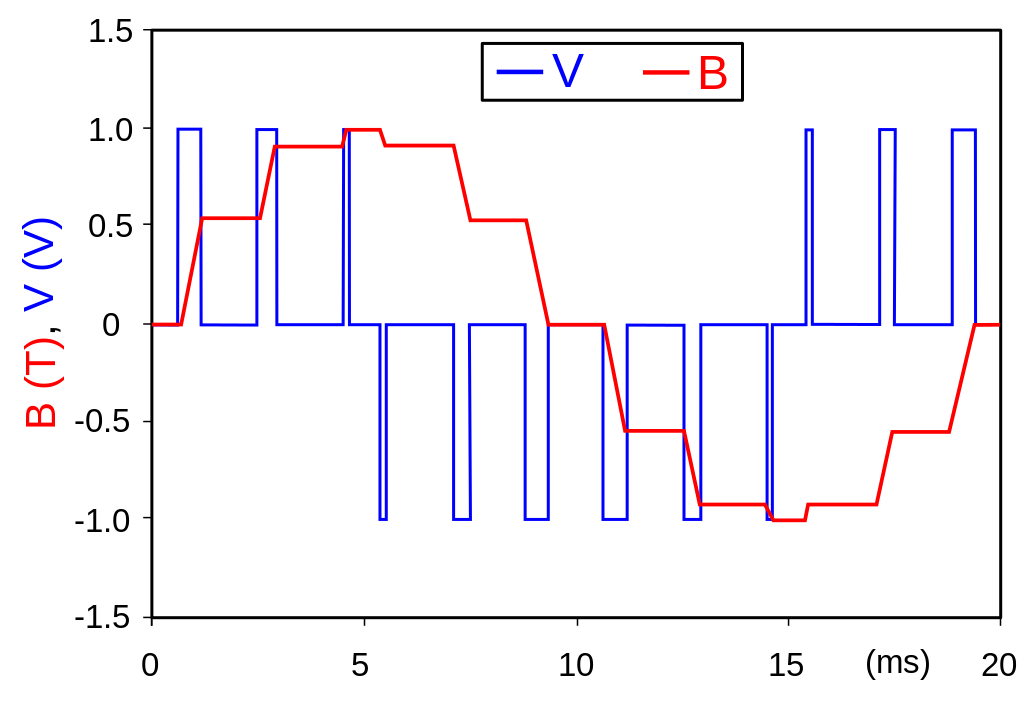 A good option for creating a sine wave is through a PWM and low pass filter. Switching must take place at a significantly faster rate than the desired frequency of the output wave, but the faster the switching, the more closely the harmonic content can be controlled. In this method, using a microcontroller capable of extremely fast switching and a feedback loop allows for a good approximation of sine waves.

Other methods of producing sine waves include using an oscillator architecture with filtering or an oscillating crystal with post-processing. 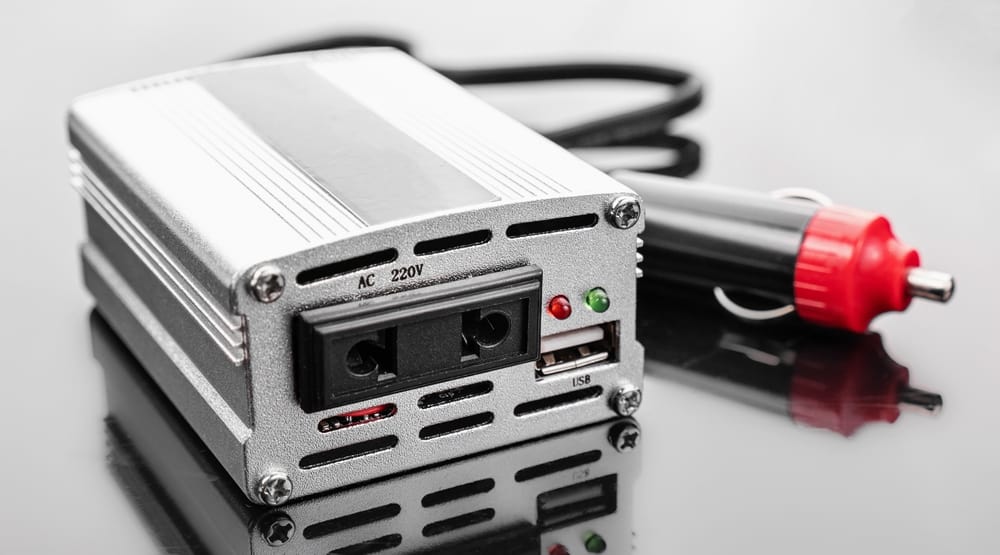 A power inverter that connects to the DC port of a vehicle.

Power inverters can be purchased as standalone devices for a variety of consumer needs.

Portable inverters can be used with larger vehicles such as trucks, boats, RVs, and more. A permanently-mounted inverter wired directly to a battery allows for users to run their computer and other larger appliances easily.

Inverters can also be used for off-grid job sites and other locations with limited access to power. These inverters run off batteries that are larger than a vehicle’s main battery. Power tools oftentimes require short periods of intense power during startup and use. In this case, using a suitable heavy duty inverter capable of providing output power to handle these surges is a good idea.

Some devices such as ATMs, special computers, networking equipment, and specific audio and video devices may require microprocessor-controlled pure sine waves. This ensures the equipment runs cool and lasts longer without inefficiencies caused by quasi-sine waves. In this case, look for inverters that provide a pure sine wave output.

Inverters are used in a variety of applications and are built into a lot of consumer devices.