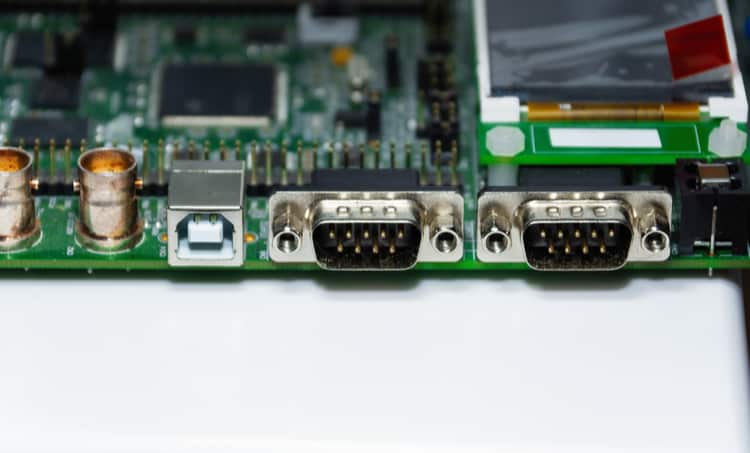 UART is a common protocol that provides full-duplex serial communication

UART is the most common protocol that provides full-duplex serial communication. More than a protocol, it is a hardware peripheral that is present in a microcontroller. UART chips are single, large-scale integration chips designed for asynchronous serial communication between a computer and other peripheral devices that are connected to the serial port of the computer.

Physically, UART is a microchip that sends and receives data from one system to another system. The purpose of UART chips is to convert incoming serial data to parallel data for the system to read and then revert back the outgoing parallel data to serial data before exchanging it to other systems. A UART chip can be regarded as a data terminal equipment (DTE) device, which enables the serial-to-parallel conversions of data in a communication bus.

In SPI communication, the clock signal generated by the controller device provides synchronization. The SDI and SDO are the signals shared by all the connected devices, whereas a unique peripheral select line is assigned for each peripheral device. Therefore, to enable SPI full-duplex communication, at least four wires are required.

So far, we have discussed the specifics of UART and SPI; now, let’s compare them.

When comparing UART vs. SPI, there are only a few similarities:

Other than that, UART and SPI have differences in speed, number of connected devices, number of pins, size, and synchronization.

Speed is one of the most important characteristics in a communication protocol, and there are a lot of differences between UART vs. SPI speed. SPI protocol is significantly faster than UART. SPI offers high-speed synchronous communication, whereas UART devices communicate with each other at speeds that are three times lower than SPI protocol.

UART transfers serial data between the devices at lower data rates than SPI. The data rate of the UART devices communicating with each other must be equal due to the asynchronous type of communication. Maximum data rates are typically in the order of 230 kbps to 460 kbps in UART communication. In contrast to UART, there is no specified data rate limit for SPI interfaces. The data rate is usually around 10 Mbps to 20 Mbps in an SPI communication bus.

Considering UART vs. SPI speed, the fastest communication protocol for sending data over short distances from the two protocols is SPI. SPI protocol is best suited for low-power applications requiring high speed. The high-speed signals of an SPI interface limit its data transfer only over short distances. To send data over further distances, you must lower the clock speed and incorporate specialized driver chips.

Irrespective of the speed of the communication protocol used, you can use Cadence’s PCB design software to realize digital systems. Leading electronics providers rely on Cadence products to optimize power, space, and energy needs for a wide variety of market applications. If you’re looking to learn more about our innovative solutions, talk to our team of experts or subscribe to our YouTube channel.